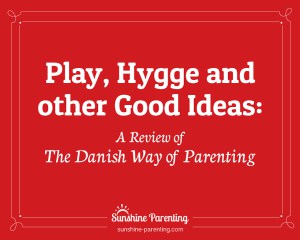 I was recently talking to a friend who spent a year in Spain, and she shared with me how different it was living there. Each day, she’d see whole families walking (ambling slowly, not hurried) together to pick their kids up from school for their two-hour midday lunch and siesta. Every Saturday, many families met at the school to hike together. There were virtually no scheduled sports or other activities at the elementary age. The focus was on social connections, being outdoors, and being with family.

I think, when we’re so immersed in our own culture, we rarely take the time to step outside our ways and see if there may be some things we can learn from others, like a de-emphasis on competitive sports for kids. Of course, we did just win the MOST medals of any country at the Olympics. That makes sense, because we are probably the country that expends the most time, money, and energy on athletics and competition. But at what cost?

In The Danish Way of Parenting (subtitled, “What the Happiest People in the Photo-Nov-28-2-21-23-PM-1024×735-1024x735World Know About Raising Confident, Capable Kids”), authors Jessica Alexander and Iben Sandahl share that one of the best cultural practices of Danish parents is not judging other parents. So, if the Danes were assessing American parenting practices, most likely, according to the authors, they’d look for the positives in our competitive, self-focused, over-scheduled, and over-supervised craziness. What this book does so nicely is not focus on what American parents do wrong but instead shares a glimpse into a culture that is obviously doing some things right – they are, after all, the happiest people in the world!

I had the opportunity to interview Jessica Alexander, and it was refreshing to hear her insights. An American-born mother of two, she married a Dane and is raising her kids overseas (in Rome). Before her children were born, Alexander observed that Danish children seemed especially well-behaved and happy.

She explained, “I saw in Denmark a long time ago how well-behaved the kids were […] and I was really struck by it.” She watched this phenomenon over the years and realized the Danes have it right. When her daughter was born, Alexander read many parenting books, but found herself always going to her Danish family and friends for advice. Without realizing it, that network became her “go to” for everything. “I really prefer the Danish Way,” she said. “And then, one day, I was reading the Happiness Report, and I found out they were the happiest people 40 years in a row!”

Once she had her own kids (now ages four and seven), she started delving into the “why” of the phenomenon she had witnessed first-hand, and what came of it was her co-authored book. A quick read (just 103 pages) The Danish Way offers some straightforward and easy-to-digest wisdom about simple practices that come so naturally to the Danes. The practices, admittedly, may be easier read about than done, but offer some suggestions for a more connected and happy family life.

BP-C01-03856We all know that research supports the importance of play for children’s optimal development, yet our schools and our family schedules have not changed much to accommodate this knowledge. Despite compelling research, American kids are getting less, not more, recess and play time. Meanwhile, “Forest Kindergartens,” exclusively outdoor preschools, are common in Denmark and other Scandinavian countries. A few have popped up in America, too, which is encouraging. The Danes value play and it shows in their children’s daily lives and helps Danish children develop important social skills like empathy and teamwork.

I loved Alexander’s description of Danish “realistic optimism,” and how Danes practice supportive language. She writes, “Danish parents are good at helping their children conceptualize their emotions and then guiding them into finding something more constructive, instead of a disparaging or limited belief” (p. 45).

I know I could use some more of this “reframing” skill!

The most interesting, and perhaps most instructive, part of The Danish Way is the explanation of “hygee” (pronounce hoo-ga), a word that has no English translation, although “we-fullness” or “togetherness” could possibly suffice. Alexander experienced it for herself, firsthand: “I was exposed to it for years in Denmark, and I didn’t realize what it was. They [the Danes] knew the rules of hygge intrinsically,” she said.

Basically, hygge is a time for family or friends to gather in a drama- and complaint-free setting and just be together. They choose activities that are enjoyable for the group as a whole. No one person does the cooking and cleaning. Instead, part of the hygge experience is doing all the work together.

Alexander explained it as “Leaving the drama at the door. It’s a safe psychological place that you enter into. No complaining. No negativity. No gossiping. That’s not in the hygge place. You can play games, you can play cards, you can talk about good memories together, you help out, no technology. What’s interesting about it is at first it can feel weird, because it’s different from what you’re used to doing. But it’s so lovely and it’s so worth it.”

To help quantify the process, Alexander shares in her book the “Hygge Oath,” which “includes all the unspoken rules of hygge and gives you this opportunity to talk about it with your family or whoever you are going to do it with.”

gac-session1-06087Alexander summed up hygge as a “focus on ‘we’ time rather than ‘me’ time.” Perhaps this collective aspect of Danish culture is what sets it apart so strikingly from our more individualistic, competitive culture.

“The Danes do it a lot. It is in their vocabulary. I do think it’s a major reason why they’re so happy. They value this social connectedness so much.”

“Scandinavia in general is very similar,” Alexander said: “They totally hygge in Norway and Sweden and Finland, even though they don’t have a word for it like the Danes do.” I was reminded of my Swedish friends who get together to roast a pig and sing around Christmas time.

I asked Alexander if Danish kids are good about putting away their phones during hygge: “There is an awareness from the kids,” she said. “Kids really do try to help out. It’s kind of an understood thing, that if it’s a real hygge thing, the kids know that for a certain period of time the phones go away. They’re really good at helping out. It’s this teamwork idea.”

Campfire-1158Alexander does not write about summer camp in her book, but I, of course, asked her if she knew about camp, because I recognized some similarities between the culture at camp and the Danish Way. She had attended camp as a child and said, “I think summer camp is an amazing place to implement the Danish Way. Unless a camp becomes uber-competitive, it’s a great mirror of these practices.” Nightly campfires are a great example of hygge!

She didn’t end up writing about it in The Danish Way much, because she thought it might be too much for us American parents to take in, but she shared that in Denmark, “There is a lot of singing. It’s super connecting when you start singing together.” I had liked her book before, but after hearing her say that, I knew I could really relate to the “Danish Way!”

Hygge Family Bonding: 7 Things I learned from the happiest people in the world

Denmark has constantly been voted as one of the happiest countries on earth for over 40 years in a row. As an American married…