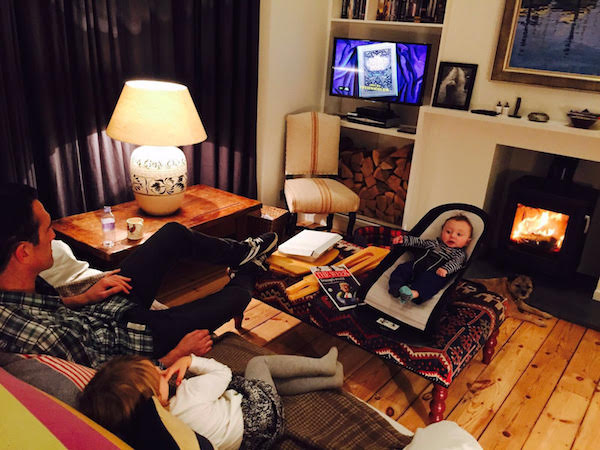 Had you, reader, at around tea time every day last September, been a fly on a wall in this writer’s kitchen, this is what you would have seen: my two and a bit year old daughter running round the kitchen table, naked from the waist down, yelping in alarm as poo dropped out of her bottom; the dog trotting behind her calmly eating it; me chasing the dog with handfuls of kitchen roll; and my nine week old, very refluxy son screaming blue murder in his bouncy chair. Hygge, eh?

For those who have been living under a rock/ parenting small people for the last year or so, “hygge” (pronounced ‘hooga’) is a Danish concept that means, literally, “to cosy around together”. At its core, it is about spending quality, low-key time with the people you love. Apparently, it is why the Danes are the happiest people on earth. But how in the hell does it apply to parents of small children?

Over the last six months or so, I have been only dimly aware of ‘hygge’ as a new lifestyle craze enjoyed by the child-free. Through a filter of sleep deprivation and constant low-level drama, I have seen beautiful pictures of happy people lying around in their socks, reading books and drinking hot chocolate in front of a roaring fire. “That looks nice,” I’ve thought, then got back to wiping human poo from my jumper. It just hasn’t seemed possible.

But, it is, it is, says Iben Sandahl. A Danish parenting expert and author of The Danish Way of Parenting: A Guide to Raising The Happiest Kids in the World, Iben says that Danish families make time for ‘hygge’ as part of their standard routine, and that it is not hard to hygge-parent2do. Simply “light a candle, make some hot chocolate, sit down with your children and give them your full attention.”

By doing this simple thing, she says, they will feel “well stimulated, seen, heard and acknowledged, and that’s something children always benefit from. It fosters an inner peace.”

This week, I gave it a go. One horrible sleeting afternoon, instead of forcing everyone out the house like I usually do, I allowed my daughter to get back into her pyjamas and “sockies” (she totally gets hygge), made some hot chocolate with marshmallows and sat with her in the kitchen, the baby on my knee, having a chat. It went so well that I also got into some slouchy trousers, lit the fire and put on The Jungle Book. Then we all had pizza for tea. At the end of the day, my daughter said (no kidding!) that “she was the luckiest girl in the whole world because mummy was her best friend.”

I wonder if being ‘hygge’ actually means being ‘lazy’? If so, I am totally on board.

How to be a hygge parent

Iben Sandahl, author of The Danish Way of Parenting: A Guide to Raising The Happiest Kids in the World, shares some dos and don’ts.

DON’T say “Now we’re really going to hygge” – there will be too many expectations that can block the mere presence of it. Hygge is an intangible concept, something that occurs in the moment and is therefore difficult to stage.

DO leave personal drama at the door. There are other times to focus on any problems you may be having. Hygge is about creating a safe place to relax with your family.

DON’T use iPhones or the iPad. Turn them off or put them away. By giving children your full attention, you make the time afterwards much easier as they are then usually ready to do something without you interacting.

DO make it a daily/weekly routine. It makes children feel safe and they will know that it is associated with something nice and comfortable.

DO make an effort to create a nice cosy atmosphere. Maybe light some candles, play a game or bake a cake. Part of the ‘hygge’ phenomenon starts with the preparations you do together.

For anyone who has read “The Danish Way of Parenting”, you may remember the not often talked about, slightly awkward rite of passage in…