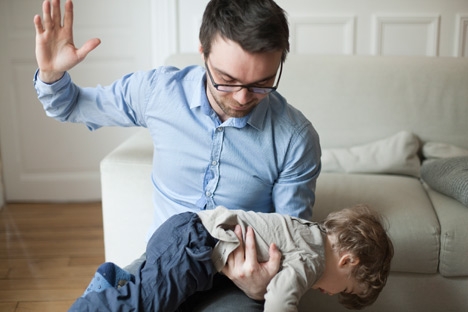 As featured in “The Local”

A family was eating dinner and a three-year-old girl was misbehaving. I don’t know how well behaved any three-year-old is supposed to be, but the father had finally had enough. He half stood up, raised the back of his hand and threatened to slap her in the face if she didn’t behave. He was a pretty big guy, as all people are compared to little children and she predictably recoiled in fear and did, in fact, “behave” after crying. He didn’t hit her then and there but clearly she had been hit before. I have seen this scene in so many different forms, with hitting and yanking, and with all ages of children. My only surprise is how foreign it becomes to me every time I see it.

I was spanked as a child as I think many of us were. I didn’t have a problem with it. I thought it was very normal to spank and why wouldn’t you spank when absolutely necessary to get a serious message across to a child? It wasn’t until I was pregnant with my first child that I started to have some serious doubts on the subject. I had taken it for granted that my husband and I would spank occasionally. How else do you discipline children? But even my fixation on the word “discipline” was already an issue for my Danish husband. He didn’t understand why we shouldn’t focus more on avoiding problems rather than “disciplining” them. He found my point of view bizarre. I found his impractical.

The truth is, most of us rarely question the way we are raised. Our upbringing is just normal to us. Society has some very engrained ideas about what is acceptable and what is not and we seldom challenge whether they are right or wrong. The way we were brought up is just part of our cultural heritage and we wear it like the skin on our bodies. Spanking, although perhaps not openly talked about, is more or less acceptable in many places. People do it. It happens. Maybe they aren’t proud of it but it is a way of maintaining order. This is true for many countries. But after numerous hours of heated debate with my husband, I started to waver. He wore me down with his arguments and I begrudgingly started to soften. I mean, it’s not that I wanted to spank but… what else do you do when you are desperate? And so, my final, very pointed question to him was this:

“Do you really think it’s possible to raise kids without hitting?”

His very serious pointed response was to laugh in disbelief at my question.

It was precisely his genuine incredulity at my position that made me truly start to question the cultural skin I was wearing.

While writing ‘The Danish Way of Parenting: A Guide to Raising the Happiest Kids in the World’ alongside Danish psychotherapist Iben Sandahl, we did some serious research into the subject of spanking and discovered some eye-opening statistics. Spanking has been illegal in Denmark since 1997. In Sweden it was abolished even earlier – in 1979.  Spanking is now illegal in more than 32 countries, including much of Europe, several South American countries, Israel, Tunisia and Kenya.

There are mountains of evidence showing the long-term negative effects of physical punishment on children. Almost all the Danes we interviewed for the book said that they considered spanking “an extremely strange, almost unthinkable form for disciplining a child.”

So after a lot of research and careful consideration, I decided to try the ‘avoiding ultimatums’ approach and focus more on managing problems than disciplining them. I am now going on seven years without raising a hand to my children and I can honestly say I don’t think hitting is necessary to raise well-adjusted, well-behaved kids. Sure it works in the short term but is it providing that strong base for trust and self-esteem that we all wish to have? Is it teaching closeness and respect out of understanding or distance and hostility out of fear? And is this yet another reason why Denmark is constantly among the happiest countries in the world, not to mention the most peaceful?

It does make me wonder: if we could all take on the cultural skin of a Dane for a little while; would the idea of spanking our children feel like a slap in the face?

Ever since our newest little one was born, I can barely manage to brush my teeth every day, let alone string together a coherent thought in…