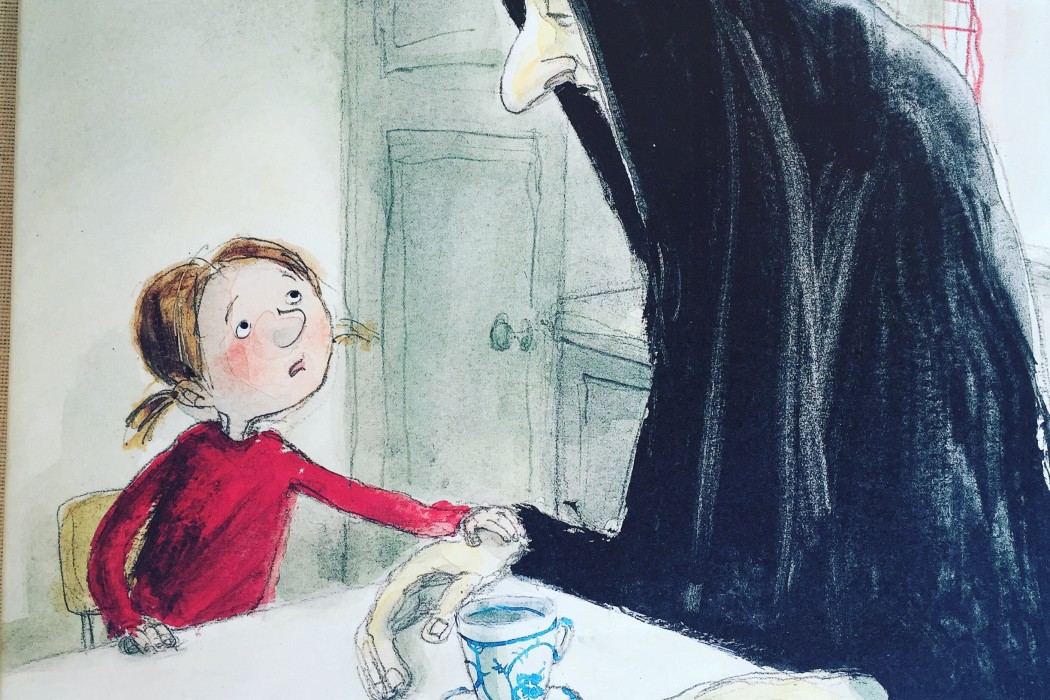 When I got in touch with the translator of Cry Heart but Never Break I was so excited to receive a copy. Finally, a Danish book about death had been translated into English and I could read it to my daughter. I know that may sound slightly morbid but I write extensively about how honest Danes are with their kids about difficult subjects like death and sex and so getting an opportunity to read a Danish book like the ones my husband reads to our daughter was kind of exciting. Reading about all kinds of emotions and topics builds more empathy and resilience, but it hasn’t been so easy for me to find these sorts of books in an equivalent English translation.

So when it arrived and my daughter and I sat down to read it, I didn’t know what to expect. I was surprised how interested she was to read about the dark hooded character on the front. In the book, Death is a character that arrives to take four sibling’s grandmother away. The children believe Death can only work at night so they try to keep him awake by giving him lots of coffee and talking with him at their kitchen table. Each child has a different feeling about Death, and when he understands what they are doing, he tells them a story about why it is important to value the loss of life in an allegory.

Eventually, however, he must go to their grandmother’s room and the children are sad that he takes her. Later, when they think of her, they remember what Death told them and even if they don’t feel good about her dying, they somehow understand.

The feeling of the story is unresolved. It isn’t happy. It isn’t sad. It is somehow empty. A breeze comes through the window as the children remember their grandmother and think about Death’s words.

“That was a weird story” my daughter said slightly miffed

“Why does death have to come?”

And so we talked about the story again. We talked about grief and sorrow and joy and happiness and how they are part of each other just like death is a part of life. I could tell it had affected her in a way only a child can be affected. She wasn’t that bothered by it and yet she had contemplated it. Now she was ready to move on. I wondered if my job was done. Had I read it the right way? Had I said what I was supposed to? I reminded myself that there are no good or bad emotions, only emotions. This is the Danish Way. The idea is just to make all topics a normal part of conversation and not judge them or shield kids from whatever feelings may come. And so we went about our Saturday.

What was interesting though was how it affected me later. When my daughter came and asked me to play as she often does, I confess I am not always 100% present or even 50% present, and sometimes I do say no more often than I would like to. But that day was different. That day I really wanted to play with her and I was more present than I have been in a long time. I felt electric. Not only was I in her game, but I felt grateful to be there and truly enjoyed every millisecond of it. I connected to her on a level I hadn’t for a long time and felt profound joy from it. In fact, I played with her many times that weekend and ever since then something has changed between us. We are closer. That may sound corny but its true.

And then it struck me how reading a book about death had affected me! It had put me more in touch with my own humanity and made me more appreciative of every little detail in my magnificent children. I write so much about “The Danish Way of Parenting” and how it makes children happier, but I forget how much it also touches us as parents.

Daring to be honest and talk authentically about what would normally be considered an awkward or even taboo subject is not easy. Sitting with uncomfortable emotions that can’t be explained away in a happily ever after can also feel strange. But what you are left with is a vulnerability and a realness that can be the catalyst for one of the greatest gifts we can give our children. True presence. And isn’t that the wellspring of true happiness?

American students are falling behind on valuable social skills. In Denmark, one simple classroom tradition works We all know what a Danish pastry is…