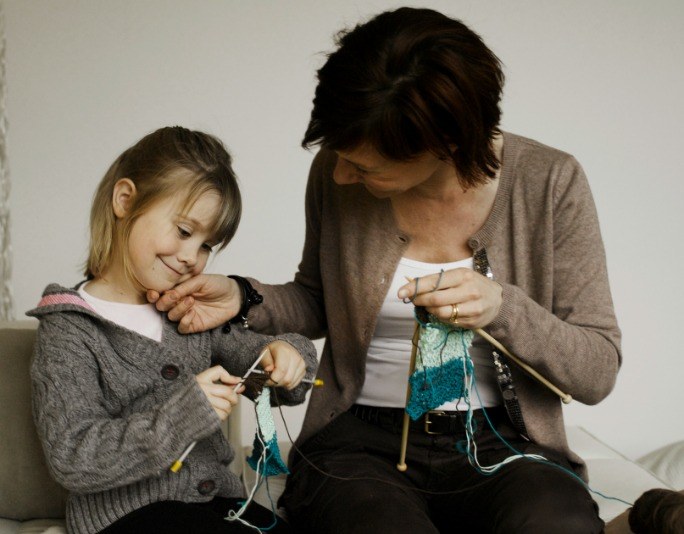 I recently returned from a short trip to Copenhagen relaxed, recharged and inspired. But it wasn’t just the top-notch rye bread or tastefully neutral fashion palate that left me soothed: it was the masses of quiet children I came across.

The quiet, neat, polite children I came across: who quietly finger painted on a piece of paper (rather than the kitchen walls) and who I witnessed with surprise, shared their toys without batting an eyelid. There was not a Veruca Salt-type demand to be heard during my entire vacation (and my trip included a day at a theme park, so that’s saying something).

On my way back to New York, the harried look of the American mother sitting next to me on the plane caught my eye. She negotiated in increasingly shouty tones with her son as he squirmed, demanded another snack, and eventually started all-out squealing because he wanted to finish his movie NOW. (“But the plane’s landed, honey. All the passengers have to get off, honey,” uttered his mom, who clearly already needed another vacation.)

In other words, the American kid on the plane acted as most normal, bored kids during transit. Except – I got to wondering – what if that’s not “normal” kid behavior in all countries? What if the Danes are onto some secret trick to producing angelic offspring?

I did some digging, and it turns out… they are.

“Children are much calmer and more serene when parented with the Danish way,” Jessica Joelle Alexander, co-author of The Danish Way of Parenting: A Guide To Raising The Happiest Kids in the World, tells Spring.St.

“When you govern with respect and empathy, not fear, it comes back to you. This is really visible in the teenage years in Denmark where there is a lot of respect and trust overall.”

She adds that some Americans have turned to the Danish method as a backlash against the United States’ apparent obsession with testing and accomplishments.

“The importance Danes place on socialization and the ‘whole child’ rather than only grades and accomplishments and the fact that we actively teach empathy to children throughout their lives makes them able to live an authentic life, feel inwardly and act on it,” co-author Iben Sandahl says.

“Danish children know that the challenges and downs of life won’t topple them, because they haven’t been spared from that.”

Sounds appealing, right? Here’s a run-down of the four top tips American parents could learn from the Danes.

1. Let kids play freely more often
Lose the fancy iPad apps and ultra-structured extracurricular activities. Free play has been considered a crucial component of education and children’s development in Denmark since 1871. And it’s been proven to have a bunch of positive outcomes.

“In Denmark, this is the most important activity a child can engage in above all else,” Alexander says.

2. Read all kind of stories to your children
Yep, this includes stories that bring up unhappy themes like death, bullying, or pursuit by a big, bad wolf. The reason? Reading and discussing these stories with your small humans gives you an opportunity to be a model of emotional health.

“Many parents find it easier to manage their children’s happy feelings, but when it comes to the difficult ones, such as anger, aggression and anxiety, it becomes more difficult,” Sandahl says.

“Children learn less about these emotions, which may affect their ability to regulate in the future. Therefore, it’s important to expand and to nuance the children’s vocabulary and conceptual world.”

3. Govern with respect, not fear
Has any parent in America not issued an ultimatum to their child recently? I doubt it. It’s super common for American parents resort almost immediately to threats and ultimatums – but Danes avoid power struggles. And it’s working.

“For them, it is very important that children understand what a rule is, not to be afraid of a rule,” Alexander says.

“Spanking has been illegal in Denmark for more than 20 years and you rarely hear screaming or yelling,” she adds. (That explains the blissful peace and quiet I noticed in Copenhagen, then.)

4. Try ‘hygge’
The Danish phenomenon of ‘Hygge’ (pronounced hooga) refers to a safe psychological space families can create together where no one has to put their guard up.

“It is celebrating time with family and friends and has a special invisible energy, which is rooted in something in between you and the other – some kind of contact and the desire to be together, like a state of mind where you feel connected, filled with proximity and shared values transformed into a ‘we’,” Sandahl says.

Think cosy Sundays on the sofa surrounded by candles and cups of tea; baking cakes with your kids; and lingering as a family at the dinner table just to hang out before cleaning up.

Alexander and Sandahl say the response to the Danish method of parenting, as taught in their book, has been overwhelmingly positive.

“So many of our readers, and the parents that are using it already, are seeing the differences in their kids,” Sandahl says.

“I hope that the ideas from the book, like seeds, will continue to spread on the wind so that more kindness, empathy, and happiness will flourish across the world.”

I just wish I’d taken the email address of that harassed mom from the plane. She could’ve used a little nudge toward this Danish recipe for parental bliss.

How many times have you been at a family gathering and some kind of drama erupts? There is a big discussion, some negative…