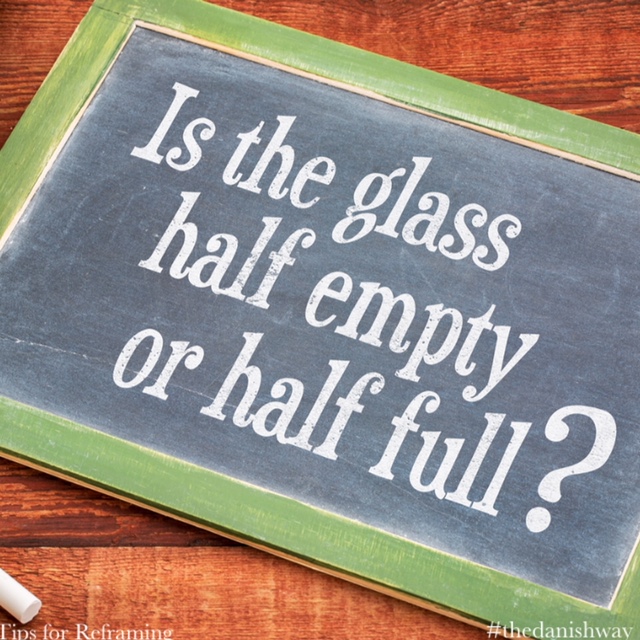 Be better at “reframing” and help your child become happier and more resilient.

“I have told you 100 times that you should stop hitting your sister. You never listen or do what I tell you to do – you’re so annoying.” Does this sound familiar?
As parents, we often end up in situations where we feel tested, powerless and reluctant in relation to our children’s behavior, so that we throw ourselves into judgmental and defining situations. We never really think our children will pick our words up and store them in their identity safety box, with all the other verbal expressions we have thrown their way over time.

A couple of years ago, my book: The Danish Way of Parenting was published and translated into 25 languages. It is a book about why Denmark has been voted the place with happiest people in the world for more than 40 years, and my co-author and I found that the answer was to be found in the way we raise our children. It is built on some important Danish values, which characterizes the way we bring up our babies. As the only person who has ever lived in Denmark I had to look on my own life – as a daughter, mother and professional.

What is reframing?
One term described in the book is reframing – a lighter version of what I have been trained at as a professional narrative psychotherapist; Re-authoring. Re-authoring is something used in therapy, but reframing is used (or should be) used everywhere. Reframing is about being able to nuance an already locked and negative thought pattern and it is a significant tool for creating greater happiness and satisfaction for yourself and your child through our use of language.

Throughout our childhood we learn to use words and sentences to describe our outer and inner reality. The language we use allows us to form mental images and tales about our past, present, hopes and dreams of the future, and to tell others about our lives. We take in a limited number of facts, assumptions, events, moods and currents to us, as long as they make sense to us.
All of these stories and information will be an important part of our sense of identity. If we are exposed to many negatively charged impulses throughout our childhood, our self-image will often bear the mark of this.
Often we develop a “cannot-mentality” if that’s what we have been told throughout our childhood. While if the opposite is a reality, supportive and affirmative impulses give a stronger and less judgmental self-image, where an “I-can-do-it mentality” dominates. We just do not think about it.

As children, we rely on caring and loving adults around us. They help us to regulate and understand our feelings. The way we are spoken to is thus crucial for what self-image we develop.
Sentences like: “She is simply so stubborn and unruly” said to a 3-year-old with a negative and judgmental undertone, the child collects it and connects it to other times, she has received something similar in the same tone. These negative and defined identity stories about “being stubborn and unruly”, she takes into adulthood as a definition of her identity.

The effect of our language use
Recently, I had a 23-year young man in my private practice. Throughout my clients childhood, he had been told that he was too demanding and too much. He never understood why and what it meant, but the tone and the way it was said to him, indicated that at least it was not good. It became his inner voice.
When he grew older and was searching for a job, he was luckily invited to a job interview at his possible new work. It went well, but unfortunately, he was rejected after the interview, based on the fact that he was over qualified. He felt rejected and immediately concluded that it was because he was too much. He blamed himself because it was just another story of being unsuccessful he could add to all the others.
His language was filled with negative and destructive beliefs, he had brought close to him, since he was a child; “I did not get the job because I’m too demanding, too much and don’t fit in anywhere.”
He couldn’t even hear the reason to why he didn’t get the job, for him it became just another event on his already existing self-image, as being wrong in an indefinable and demanding manner.

Our reality and understanding are created with the language we use. Therefore, all changes will require a change in the language.
Think about whether you speak to yourself or your children in a supportive or inhibitory way. Words like “he is so…” or “I am too…” Are generally negatively defining and stigmatizing phrases that only intend to suppress a positive and supportive self-image.
Reform, redefine or reframe. It’s about shifting the focus from what we think we cannot create an opening for possible change.

How reframing works
Research shows that the ability to reformulate a stressed situation, a family conflict, a negative employee situation or an unhappy hysterical child can change our overall satisfaction and self-image.
Instead of saying: “she can’t”, the same sentence may sound: “she is not there yet.” Or a sentence like: “She is so touchy” can be redefined to: “Be glad, she is so good at tuning in on her own and others’ feelings.”
It opens up for the feeling of being in motion and moving. Your mindset changes the focus from a belief from: “It is just the way it is-status quo feeling” to an: “It’s possible” or “I am sure it will be absolutely fine feeling”. Your state of mind changes with your words. It also goes for our children.

We develop when we believe that our hope and dreams can succeed. We also grow when others believe in us and give us confidence.
Once we master the ability to reformulate or redefine our inhibitory/definitive language usage, we must gather the positive stories in which we succeed. It’s not about eliminating negative events (that’s often misunderstood) – they all come true – it’s just about seeing the same subject in more shades than in just one color.

This is one of our most popular articles as featured in mothermag More so than making sure they end up being doctors, teachers, architects,…