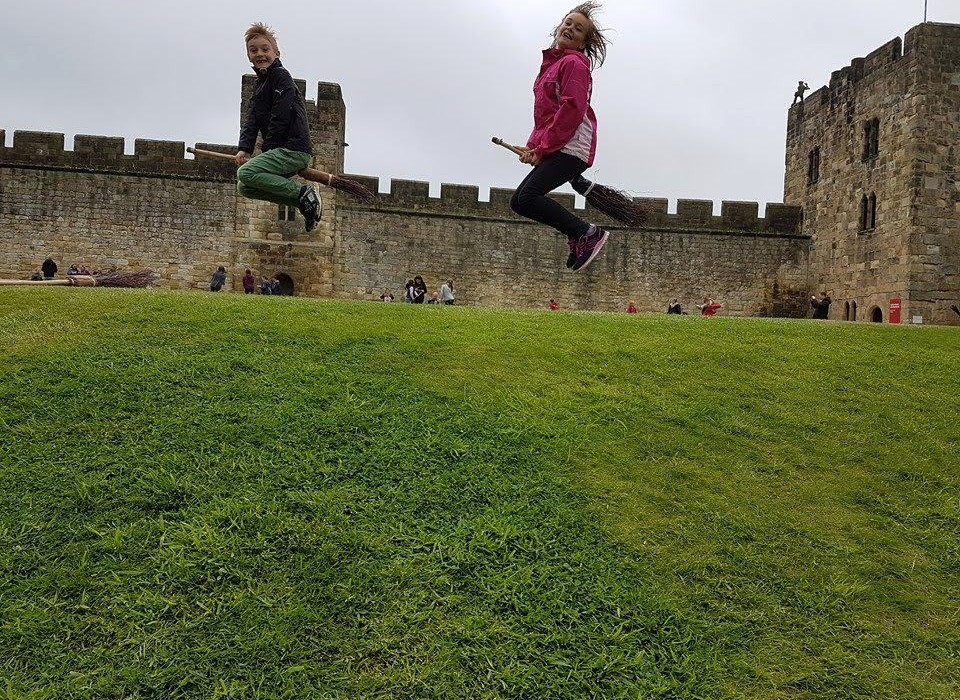 FOR more than 40 years, the people of Denmark have been rated the happiest on the planet by world trade body the Organisation for Economic Co-operation and Development.

So what is it about this small country – famous for fairytales, Lego and probably the best lager in the world – that has such a contented population?

Researchers Jessica Alexander and Iben Dissing Sandahl think the answer lies in the way the Danes are brought up.

Their new book, The Danish Way of Parenting, examines methods that have been working in Denmark for generations.

The Danish approach seems to produce resilient, emotionally secure, happy children who then repeat the pattern with their own kids. The philosophy is woven so tightly into Danish culture that they don’t even think about the way they parent – they just do it.

So could we benefit from it?

We asked mum-of-two Tamandra Christmas Baxter, 42, husband Jim, 51, who works in recruitment, and their children Florence, ten, and Freddie, seven, to follow the guidelines in the book.

Tamandra, of Maidstone, Kent, said: “We’re a positive family but I was interested to see if it would make a difference.”

Here, NATASHA HARDING outlines the rules that Danish parents follow and reveals whether Tamandra’s family were happier after following them for seven days.

THE more children play, the more resilient and socially adept they will become.

Free play helps them to become less anxious and teaches them resilience, which has been proven to be one of the most important factors in predicting success as an adult.

The ability to “bounce back”, regulate emotions and cope with stress is a key trait in a healthy, functioning adult.

We now know that resilience is great for preventing anxiety and depression, and it is something the

Danes have been instilling in their kids for years. And one of the ways they have done it is by placing a lot of importance on play.

TAMANDRA SAID: “Having a smaller selection of things to play with was surprising. I gave Freddie a few Lego bricks instead of all five tons and he built some very different creations and played happily for longer.

“Florence enjoys being creative so rather than just letting her automatically crash in front of the TV, I sat with her and we spent a very happy time together.

“She spoke about things that were playing on her mind at school, which we rarely get a chance to talk about.”

FLORENCE SAID: “I really enjoyed playing games as a family and would love to do this more often. I didn’t watch as much TV and didn’t miss it.”

FREDDIE SAID: “I loved playing games with Mummy and Daddy. I would normally only play with my sister or friends so it was fun to be together.”

Turn off the TV and the electronics, encourage children to be creative.

Let them explore outside.

Mix children of different ages, or let them play alone.

CHILDREN observe how you feel anger, joy, frustration, contentment and success and how you express it in the world.

We have to model honesty for our children and let them know it is OK to feel all of their emotions.

Many parents find it easier to manage their kids’ happy feelings, but find it more difficult when it comes to challenging ones, such as anger, aggression and anxiety.

TAMANDRA SAID: “I made a conscious effort to not just give praise as a default response to everything.

“We did a drawing exercise where we each chose an object for the other to draw. Rather than say, ‘Oh, that looks great’, we had to give specific feedback ie, ‘That’s a great start, how about you make this part of the drawing a little more detailed?’

“It showed me the children can take constructive criticism and honest feedback and they seemed to get something from that too.”

FLORENCE SAID: “My maths homework wasn’t going right so I told Mummy I was rubbish at maths. She told me that wasn’t true and it made me think about my own frustrations.”

FREDDIE SAID: “Mummy told me how to make my drawing better so I did a really good drawing I was proud of. Her encouragement made me feel like I am OK at drawing and I proved that to myself, rather than getting annoyed like I usually would.”

Express your own thoughts and feelings as honestly as possible and answer kids’ questions sincerely.

Don’t use praise as your default response, be genuine.

DANES don’t pretend that negativity doesn’t exist. They just point out in a rather matter-of-fact way that another side also exists that you may never have even considered.

Also, they generally tend to be more tempered in their assumptions. Danes are what psychologists call “realistic optimists”.

TAMANDRA SAID: “This was the hardest for me to put into practice but one I will continue to use, particularly if there are any playground issues.

“Although Florence has a wide circle of friends, she has tiffs like any other schoolgirl. This technique seemed to teach her to understand another person’s perspective and she started analysing the other person’s reaction to see whether there was a problem.”

FLORENCE SAID: “I learned to take a step back from certain situations and to be on my own when things got a bit too much.

“When I was called a name, I went to the quiet area of the playground rather than telling a teacher.”

FREDDIE SAID: “When Florence and I were arguing, I decided to play with my toy cars instead.

Normally we’d only stop fighting when Mummy comes in.”

Pay attention to your negativity; use less limiting language.

Separate the actions from the person — so don’t label your child as lazy but rather they’re behaving in a lazy way.

Rewrite your child’s narrative to be more loving and use humour.

EMPATHY helps us connect with other people. It develops in infancy.

A child learns to tune into their mother’s emotions and moods, then those of other people.

Eye contact, facial expressions and tone of voice are key early on. It is how we first learn to feel trust, attachment and empathy.

TAMANDRA SAID: “We read different books then spoke about how the characters were feeling and the different levels of fear a person can experience.”

FLORENCE SAID: “I learned why people act differently and have lots of emotions. The time Mummy and I spoke about all these different emotions was special.”

FREDDIE SAID: “I have learned what can upset people, what makes them happy and sometimes angry.

When I saw Florence upset, I wanted to look after her after my chat with Mummy.”

Seek out empathy in others.

DANES see children as intrinsically good and react to them accordingly.

In English, we call the toddler years the “terrible twos” whereas in Danish it is called trodsalder — meaning “the boundary age”.

Children pushing boundaries is seen as normal and welcomed, not annoying and terrible.

Shouting at kids is rare in Denmark. But this doesn’t mean being soft. Be firm but kind instead of losing your temper with your children.

Avoiding power struggles and ultimatums makes for a more peaceful and safer-feeling atmosphere.

TAMANDRA SAID: “I often give ultimatums in the form of a choice — either they watch all the TV they want today and don’t watch any tomorrow or they turn it off now.

“It was hard for me to change this but when I did, it felt liberating.

“When I asked them to put their toys away and they hesitated, I just reminded them of the toys that they could play with in the bath, which is where I wanted them to go next. It worked.”

FREDDIE SAID: “Mummy seemed less strict this week which was nice and we all had more fun together.”

TIPS FOR NO ULTIMATUMS

Distinguish the behaviour from the child — don’t blame the child.

Try to see that children are inherently good.

Get your partner involved.

GROUP projects encourage children in Denmark to help others and to learn about teamwork.

Kids are taught to seek out others’ strengths and weaknesses and to see how they can help, going deeper than just what’s on the surface.

Danes are known for being easy to work with and humble. They often help others to help themselves.

TAMANDRA SAID: “One Friday, we went out into the garden to play I Spy and other games.

“We stayed out there for ages and rather than rushing off to make the dinner, I made a conscious effort to stay with the kids.

“Dinner was late but it didn’t matter at all. I’ll do this again.

“Usually Fridays can be a flashpoint as the kids are tired and ratty, but this time we were like a family in an advert.”

FLORENCE SAID: “I loved it when Daddy came home early and we all read books out loud as a family.

Now we are planning more trips to do together and I am excited about our family summer camping trip.
“We usually eat some of our meals together but this week we did it even more and I loved it.

“It meant we chatted more as a family and I felt Mum and Dad made time to listen to us more than ever.”

FREDDIE SAID: “We now have a list of activities we are planning together. I am looking forward to roasting marshmallows on the campfire with Mummy, Daddy and Florence.”

Agree to leave daily stressers at the door and have fun together.

Keep things simple and don’t have too many toys.

Make the home cosy and prepare food and drinks together.

WHAT DID THE KIDS THINK?

Freddie enjoyed playing games and said he’d choose that over watching TV every day, unless there was a new episode of Ninjago.

Florence had a busy week with end-of-year productions but admitted she’d hardly watched any TV.

She said she felt she had got on with her brother a lot better and that they had played some cool games.

DID YOU FEEL HAPPIER AND HAVE A MORE HARMONIOUS HOUSE?

Definitely. There have also been lots of warm and fuzzy moments with the children too. I have had to devote a lot more of my time to playing with the children than I would do normally and that has been to the detriment of tidying the house and doing other odd jobs.

Employing the distraction techniques instead of dishing out ultimatums has worked out very well and, while we still had plenty of disagreements, they seemed to fade away much faster than before.

It took every ounce of my energy to try and change this and I suspect that in a busy week when I have lots of things on, I worry that I just won’t have the energy.

But I will try to maintain our newly improved happiness levels.

The secret to the happiest families on Earth—in one word

Florida native Jessica Joelle Alexander wondered, when she married a Dane, what made his country the home of “the happiest people in the world.”…