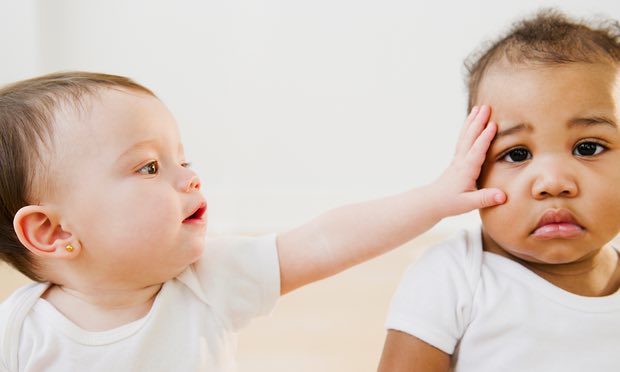 A new report says that babies in the UK, Italy and Canada cry the most, while Danes, Germans and Japanese babies cry the least. So, what are they doing differently in Copenhagen?

It’s official. Denmark – as well as being the world’s best country to live in for women with the second-happiest people and one of the best healthcare systems in Europe – has the most contented babies. Or, at least, the ones who cry the least. According to research published in the Journal of Pediatrics, Danish, German and Japanese babies cry the least, while British, Canadian and Italian babies cry the most.

“I’m not surprised,” Danish parenting expert and co-author of The Danish Way of Parenting Jessica Joelle Alexander tells me. “The first year of a child’s life is considered so important in Denmark and that’s such a different perspective to other countries. Danish parents are much less stressed because they get good maternity and paternity leave. The vibe is much calmer and, if mothers are getting more time off, that goes hand in hand with less stress, more contact, good routines and less crying.” She pauses before throwing in a final tip: “Oh, and Danish babies sleep outdoors a lot.”

In Denmark, a woman is entitled to four weeks pregnancy leave (yes, before the baby is even born!) followed by 52 weeks of paid leave that can be shared between parents. And Alexander, whose own two children incidentally “didn’t cry much” when they were infants, thinks there is another crucial reason why Danish babies – who also displayed the lowest levels of colic in the study – cry less: breastfeeding. “It’s just the done thing in Denmark,” she says of a country that routinely has among the world’s highest breastfeeding rates. (According to a 2016 study in the Lancet, the UK has the lowest rate in the world.) “In other countries, there are continual discussions about whether you should or shouldn’t breastfeed. In Denmark, breastfeeding has never gone out of style. And everyone does it for a year.”

Alexander, who is American but raised her children in the Danish city of Odense, adds: “I was a breastfeeding maniac, but I had a lot of problems. It was very difficult for me, and most people in my situation would have stopped. My Danish family’s response was: ‘Well, if you want to breastfeed, you will,’ so I was like: ‘OK, I’d better get back to it.’”

For Iben Dissing Sandahl, Alexander’s co-author and mother of two teenage daughters who – you guessed it – “didn’t cry much” as babies, a lot of it comes down to the Danish attitude to life in general. “We are an honest and authentic people,” she tells me. “We are surrounded by social support and are less likely to become angry, sad or frustrated when our babies are crying. And we are good at embracing all kinds of feelings, so we aren’t scared [if they do]. Instead, we try to connect with the babies when they cry.”

So Danish babies do cry after all: but, in Denmark, people are more accepting of it? “Exactly,” Sandahl says. “It’s how babies communicate and it’s about trying to understand it. What is the baby trying to tell us as a parent when they cry?”

Originally featured in The Guardian

“Hygge” or “cozying around”, is a concept the Danes prize very highly. “Hygge” is a feeling as well as an action and a way…