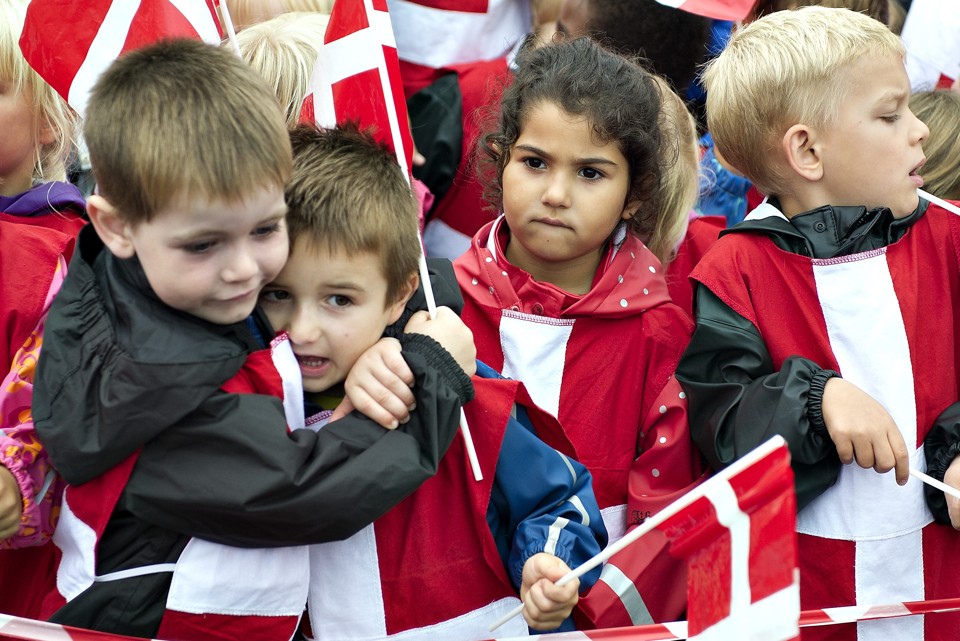 Perhaps unlike their U.S. peers, kids in Denmark—where happiness levels are the highest on Earth—are taught in school to care for one another from a young age.

Contrary to popular belief, most people do care about the welfare of others.

From an evolutionary standpoint, empathy is a valuable impulse that helps humans survive in groups. In American schools, this impulse has been lying dormant from a lack of focus. But in Denmark, a nation that has consistently been voted the happiest place in the world since Richard Nixon was president, children are taught about empathy from a young age both inside and outside of school.

Children in the Danish school system participate in a mandatory national program called Step by Step as early as preschool. The children are shown pictures of kids who are each exhibiting a different emotion: sadness, fear, anger, frustration, happiness, and so on. The students talk about these cards and put into words what the child is sensing, learning to conceptualize their own and others’ feelings. They learn empathy, problem-solving, self-control, and how to read facial expressions. An essential part of the program is that the facilitators and children aren’t judgmental of the emotions they see; instead, they simply recognize and respect those sentiments.

Another program, which is increasingly popular, is called CAT-kit. This program is aimed at improving emotional awareness and empathy and focuses on how to articulate experiences, thoughts, feelings, and senses. Tools in the CAT-kit include picture cards of faces; measuring sticks to gauge intensity of emotions; and pictures of the body, on which participants can draw the physical aspects and location of emotions. Another tool is called My Circle: Children draw their friends, family members, professionals, and strangers in different parts of the circle as part of an exercise on learning to better understand others.

Denmark’s Mary Foundation—named after the country’s crown princess and soon-to-be queen—has contributed to empathy training in schools, too. It’s anti-bullying program, which has been implemented across the country, encourages 3- to 8-year-olds to talk about bullying and teasing and learn to become more caring toward each other. It has yielded positive results, and more than 98 percent of teachers say they would recommend it to other institutions.

Another, less obvious example of empathy training in Danish schools is in how they subtly and gradually mix children of different strengths and weaknesses together. Students who are stronger academically are taught alongside those who are less strong; shier kids with more gregarious ones; and so on. The goal is for the students to see that everyone has positive qualities and to support each other in their efforts reach the next level. The math whiz may be terrible at soccer, and vice versa. This system fosters collaboration, teamwork, and respect.

Perhaps, then, it is no surprise that empathy is one of the single most important factors in fostering successful leaders, entrepreneurs, managers, and businesses. It reduces bullying, increases one’s capacity to forgive, and greatly improves relationships and social connectedness. Empathy enhances the quality of meaningful relationships, which research suggests is one of the most important factors in a person’s sense of well being. Research also suggests that empathetic teenagers tend to be more successful because they are more purpose-driven than their more narcissistic counterparts. And if you think about it, it all makes sense. Successful people don’t operate alone; every human needs the support of others to achieve positive results in his or her life. Maybe by focusing on actively teaching empathy to U.S. children as they do in Denmark, America’s schools will make happier adults in the future.

When children aren’t pushed or pulled to learn they develop a strong inner drive. This is paramount for real self confidence. In Denmark, respecting…